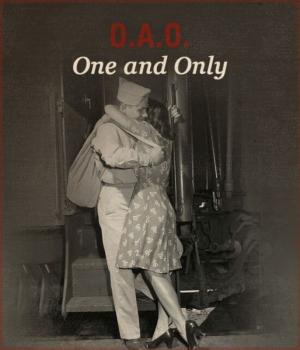 A Collection of World War II Slang From the Front
Ack-Ack. Anti-aircraft fire.
Admiral of the Swiss Navy. A self-important person.
Ammo. Ammunition.
All-Out. With full vigor, determination, or enthusiasm.
Armed to the Teeth. Well equipped with firearms; alert; fully prepared; awake to danger.
Armored Cow. Canned milk. Variations: Armored Heifer; Canned Cow.
Army Banjo. Shovel.
Army Chicken. Franks and beans.
Army Strawberries. Prunes.
Asparagus Stick. A submarine’s periscope.
Asthma. The company wit, so-called because he’s full of wheezes (jokes).
AWOL. Absence without official leave. – nedovolené opuštění
Awkward Squad. Men who require extra instruction at drill.
Axle Grease. Butter. - Máslo
BAM. A “broad-assed Marine” (i.e., a female Marine).
Baby. Mustard; from its resemblance to that which comes out of the hind end of an infant.
B-ache/bellyache. To complain.
Bags of Mystery. Sausages.
Bail Out. Parachute jump from plane; by extension, to get out of a situation like a date.
Baptized by Fire. To have been under enemy fire for the first time; to have received one’s first wounds.
Bath Tub. Motorcycle sidecar.
Battery Acid. Artificial lemonade powder included in K-rations — considered undrinkable and regularly discarded or used as cleaning solution.
Battle Breakfast. A Navy term referring to the heavy breakfast of steak and eggs commonly given to sailors and Marines on the morning of a combat operation.
Battle Watch. To do one’s best under difficult circumstances.
Bayonet Course. Hospital treatment for venereal diseases. “Bayonet” refers to the male member.
Beachhead. A beach where invading forces land; a fortified position on a beach.
Beat Your Gums. To talk a lot about something. Variations: Gumming; Jawing; Chin Music.
Become a Gold Star in Mom’s Window. A gentle way of saying killed in action.
Bedpan Commando. Medical corpsman.
Behavior Report. Letter to a girl back home. Zpráva o chování. Dopis domů dívce.
Belly Cousin. A man who has slept with a woman you slept with. 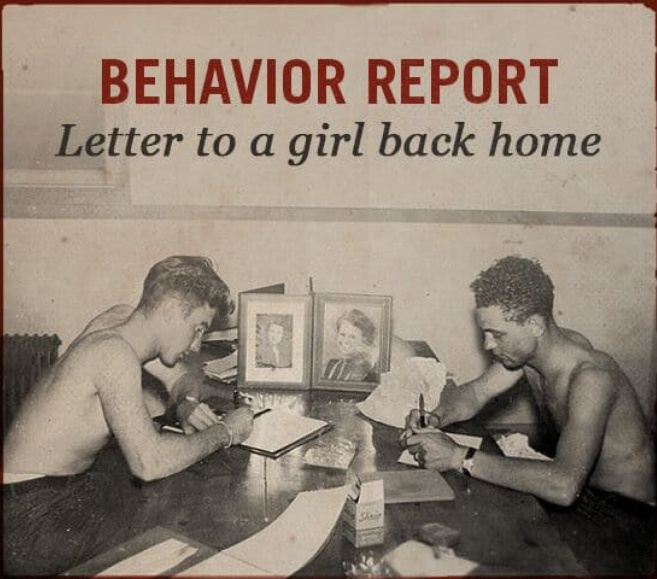 Bite the Dust. Killed or wounded.
Blanket Drill. A nap. Prostěradlový výcvik. Zdřímnutí.
Blind Flying. A date with a girl you have never seen.
Blister Foot. Infantryman.
Blister Mechanic. Hospital corpsman.
Blow It Out Your Barracks Bag! Shut up! Go to Hell!
Body Snatcher. Stretcher bearer.
Bone. To study.
Borrowed Brass. False courage inspired by drugs or drink. Variations: Bought Guts; Drugstore Nerve.
Bottled Sunshine. Beer.
Broad With a Heat Wave. Passionate woman; women with a venereal disease.
Broad With a Load of Lettuce. A woman of wealth.
Broad With Canned Goods. A virgin.
Brown-noser. Ass-kisser. To curry favor, or “boot-lick.” Variation: Brownie.
Brush-Off Club. Men in the armed forces who have been dumped by their girlfriends. Variation: The Ex-Darling Club.
BTO. Big Time Operator — someone who thinks he’s important.
Buck Private. The lowest rank in the Army.
Bug Juice. Insect repellent.
Bunk Lizard. A lazy solider with a sloth-like attraction to his bed. Variation: Sack Rat.
Burn and Turn. Game of blackjack. 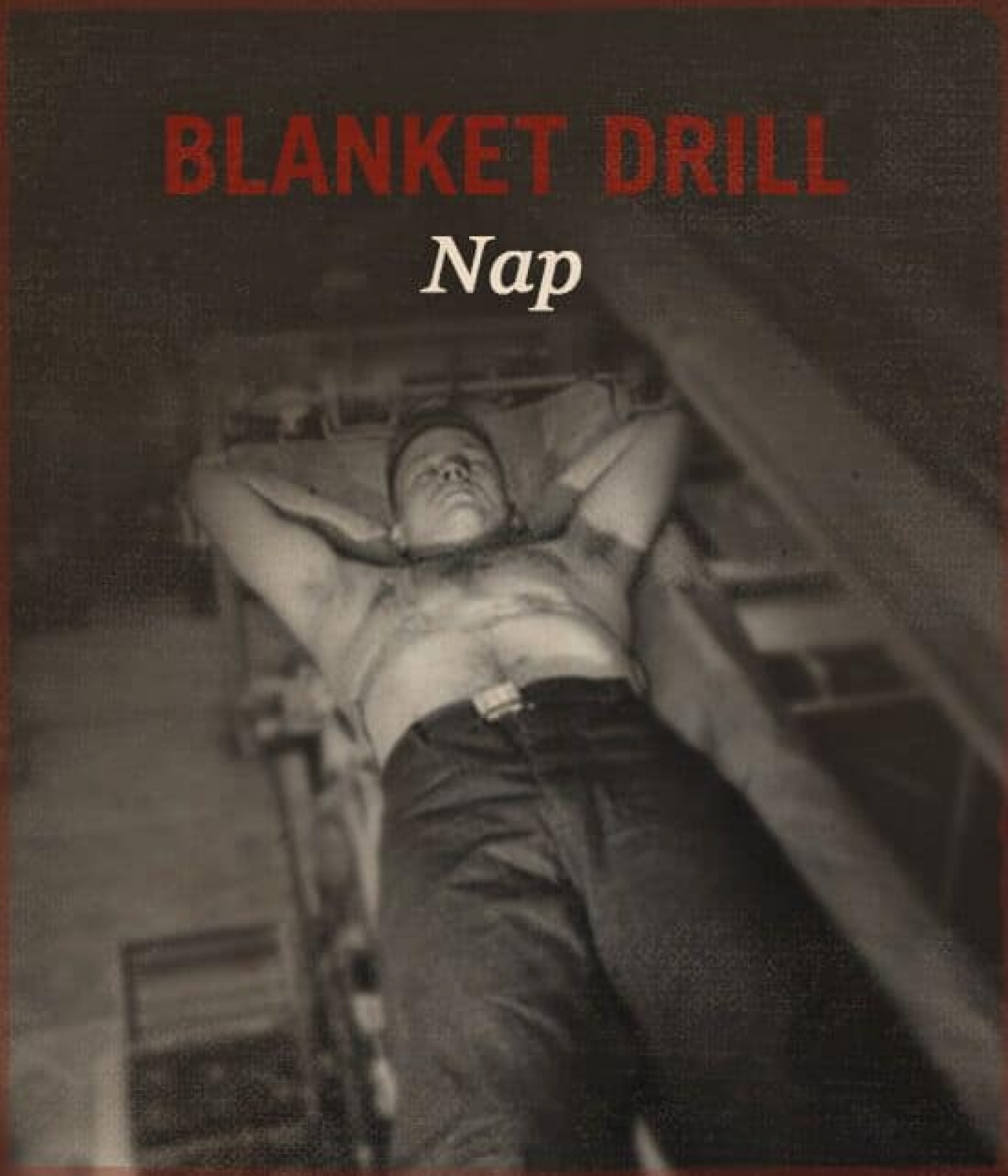 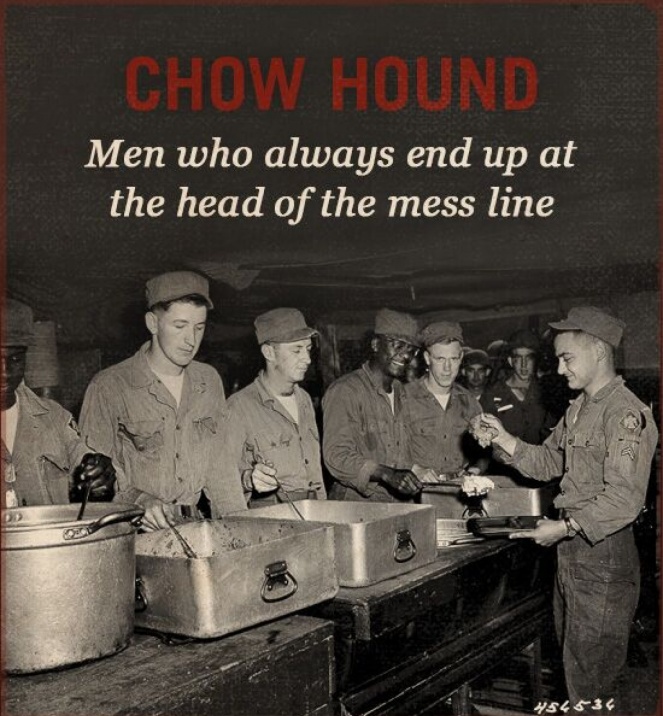 Cit. A civilian; from “citizen”.
Civvies. Civilian clothing.
Coffee Cooler. One who seeks easy jobs; a loafer.
Collision Mats. Pancakes or waffles. Nabouraná rohožka. Lívance nebo vafle.
Completely Cheesed. Bored to an extreme.
Cooking With Gas. Having become wise to something.
Cool as a Cucumber. Alert and aware; self-possessed; calm.
Cool Hand. One who is cool as a cucumber.
Corner Turner. A deserter.
Cracked Egg. A silly or stupid person.
Crumb Up. To get a haircut, shoeshine, freshly pressed shirt, etc., in preparation for an inspection.
Cupid’s Itch. Any venereal disease. 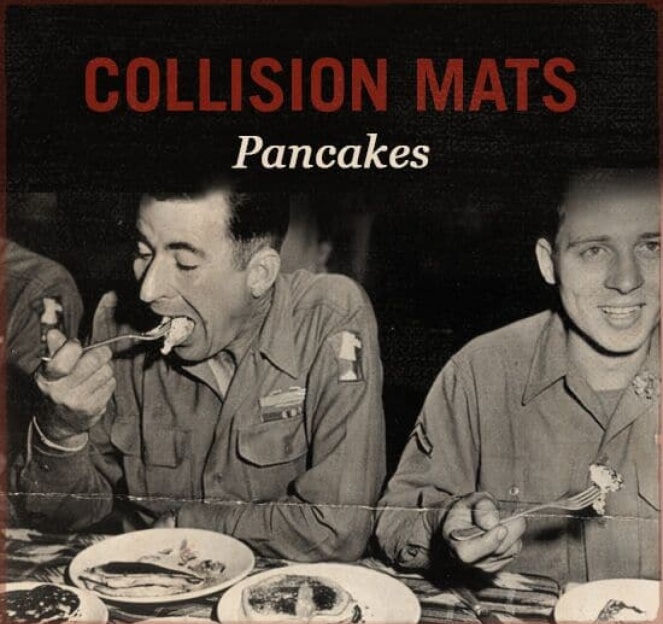 Dad. The oldest member of a group.
Dead Battery. An irritable or gloomy person; a pessimist.
Dead Nuts On. Fond of; in love with.
Dear John. A letter from one’s wife or sweetheart informing one that the relationship is over.
Devil Beater. Chaplain.
Devil Dogs of the Sea. The Marines.
Devil’s Piano. A machine gun.
Devil’s Voice. A bugle call.
Dirty Gertie of Bizerte. A promiscuous woman.
Do a Hitch. To serve an enlistment.
Do One’s Bit. To serve in the military in time of war; to engage in war work.Dogface. Infantryman.
Dog Food. Corned beef hash.
Dog Show. Foot inspection. Výstava psů. Prohlídka nohou.
Dog Tags. Two metal identification tags worn around the neck, one to be collected and one to be left with the body after death. 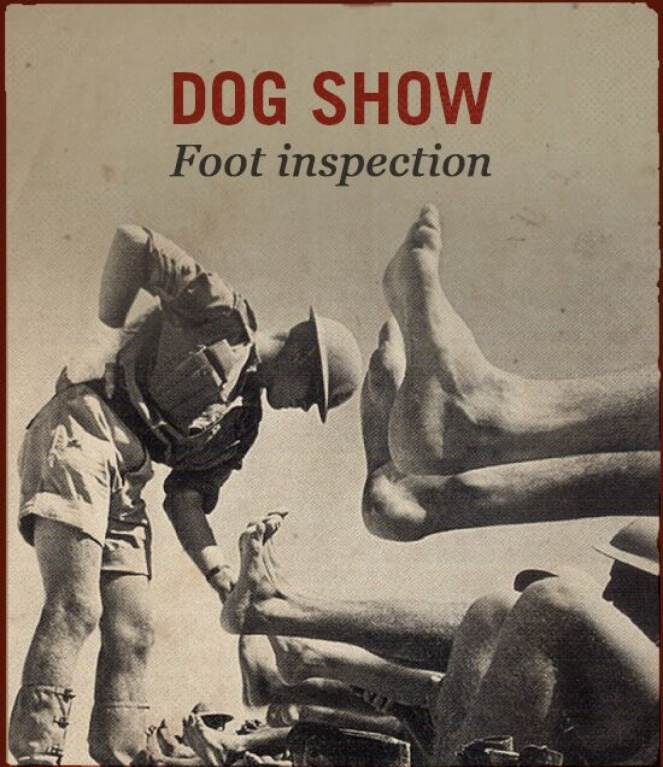 Do-Re-Mi. Money.
Downhill. The second half of an army enlistment.
Duck Soup. An easy task.
Dude Up. To dress in one’s best uniform.
Eager Beaver. A soldier is so anxious to impress his superiors that he volunteers for every job that’s offered, or otherwise displays unusual diligence.
Eagle Day. Payday; also known as “the day the eagle shits.” A reference to the American eagle that appears on some coins.
Ear Beater. A person who doesn’t let you get a word in edgewise.
Egg in Your Beer. Too much of a good thing.
Eight Ball. A solider who gets into trouble so much that he’s a liability to his unit; from the old notion that it is bad luck to be behind the eight ball in pocket billiards.
Eisenhower Jacket. A short, fitted, belted jacket of the type made popular by General Dwight D. Eisenhower during the war.
Emily Posters. Naval cadets; so-called because they were given a condensed edition of an etiquette book by Emily Post.
File 13. Wastebasket.
Flak. Abbreviated form of German word Fliegerabwehrkanone, or “pilot warding-off cannon” (anti-aircraft fire).
Flyboy. A glamorous pilot (usually used ironically).
FUBAR. Fouled (or fucked) up beyond all recognition.
Garbage Catcher. A metal mess tray with eight depressions in which food is served.
Gasoline Cowboy. Member of the armored division (usually a tank driver).
Gertrude. An office clerk.
Get-Alongs. Legs.
Get Cracking. To get started; to get into the air. Borrowed from the British RAF.
G.I. Government Issue; an enlisted soldier. “Being G.I.” means doing only what is authorized and not wishing to take any risks.
Gibson Girl. A hand-cranked radio transmitter included in aircraft life rafts; so-called because of its wasp-waisted shape, reminiscent of the beautiful, idealized women drawn by Charles D. Gibson.
G.I. Jane. A member of the Women’s Army Corps. Variations: G.I. Jill and G.I Josephine.
G.I. Jesus. Chaplain. Vojácký Ježíš. Kaplan. 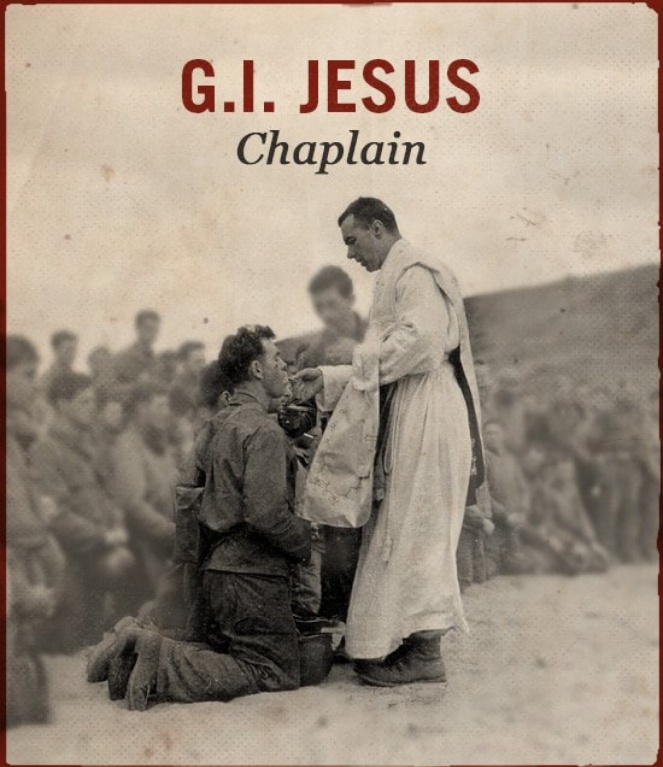 G.I. Joe. A soldier.
Gink. A stupid person.
Ginkus. A contrivance; a thingumajig.
Give It the Deep Six. Forget it; keep it a secret. From older naval slang for burial at sea, which was known as “the deep six,” probably from the custom of burying people six feet underground.
Good-Time Charley. A person given to carousing; a generous person.
Grandma Gear. Low gear.
Gravel Agitator. Infantryman. Míchačka štěrku. Pěšák.
Guardhouse/Barracks Lawyer. A person who knows little but talks much about regulations, military law, and “soldier’s rights.”
Ham That Didn’t Pass Its Physical. Spam, the ubiquitous canned meat which was served to soldiers up to 2-3 times per day. 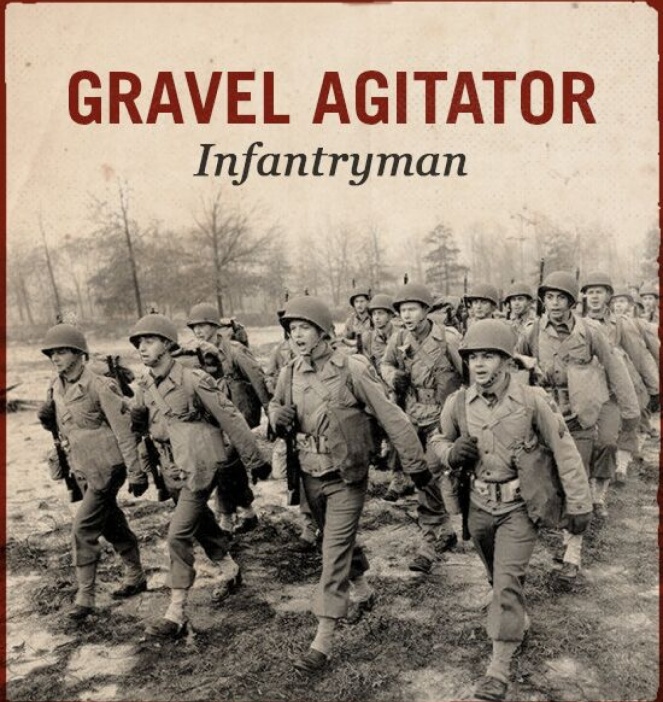 Hashburner. Cook. Spalovač sekané. Kuchař
Hangar Warrior. An airplane mechanic who boasts about what he would do if he were a pilot.
Haywire. Used to describe a piece of equipment that was not behaving itself, or an event that took a bad turn. Derived from the use of haywire (baling wire) to make farm repairs.
Hubba, Hubba! An exclamation of approbation, thrill, or enthusiasm by a man for a woman
Jane. A Woman.
Jane-Crazy. Over fond of women.
Jap. Japanese person; anything Japanese.
Jawbreakers. Army biscuits.
Jeep. A small, low, khaki-colored car in general use in the Army. 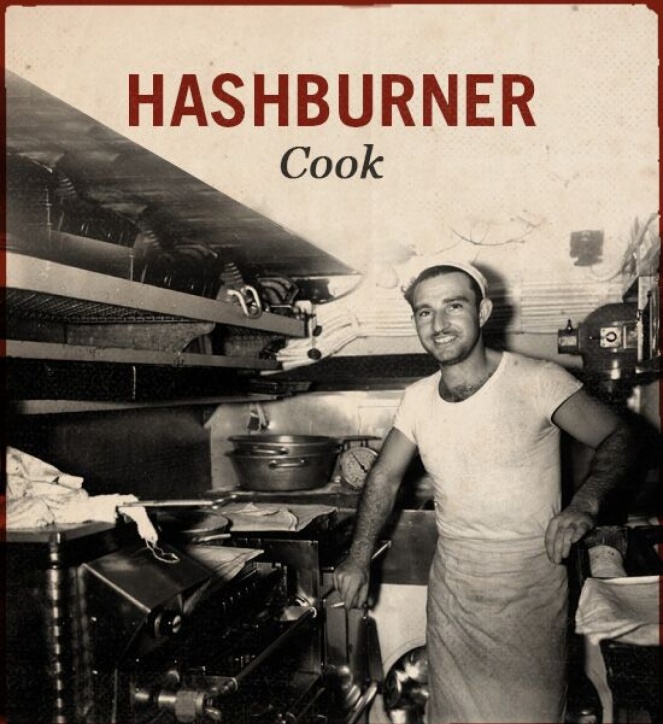 Jeepable. Impassable except by a jeep (said of a rough road). Neprůchodné s vyjímkou jeepa.
Jerry. A German; anything German.
Joe. Coffee.
“Joe Blow” Biography. A short biographical article featuring a fighting man, written for publication in a hometown newspaper.
Juice. Electricity.
Juice Jerker. Electrician.
Just Sweating Member. Pending or prospective member of the Brush-Off Club; he doesn’t know where the hell he stands but the mail doesn’t bring in “Sugar Reports” any longer.
Khaki-Whacky. A woman overly fond of men in uniform.
Knucklebuster. Crescent wrench. 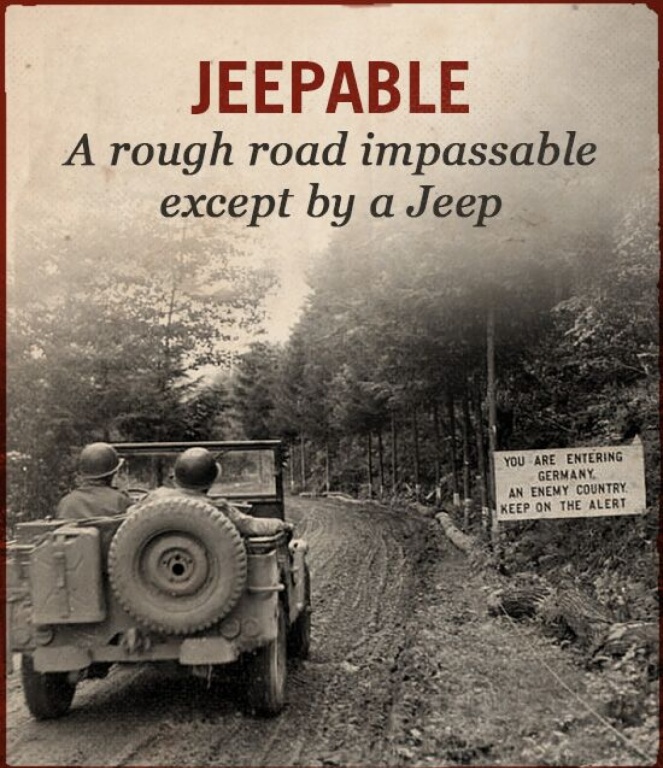 Kraut. A German; from “sauerkraut.”Latrine Rumors. Unfounded reports.
Lay an Egg. Drop a bomb. Snášet vejce. Hodit bombu.
Looseners. Prunes.
Low on Amps and Voltage. Lacking ambition and ideas.
Mae West. An inflatable life jacket that fit around the neck and down the chest, and bulged the chest when inflated. Named for the singer/comedienne who was known for her small waist and large bust.
Maggie’s Drawers. Red flag used on the rifle range to indicate a miss; as in, “He fired a full clip but all he got was Maggie’s drawers.”
Mickey Mouse Movies. Instructional films on personal hygiene.
Mickey Mouse Rules. Petty rules, regulations, and red tape.
Million Dollar Wound. A wound that took a soldier out of combat, and even perhaps back to the US for treatment, but did not permanently cripple or maim him. 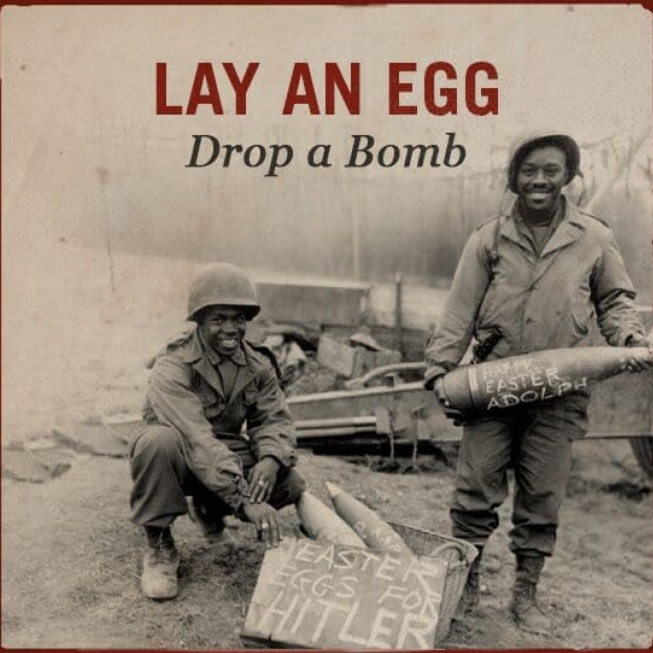 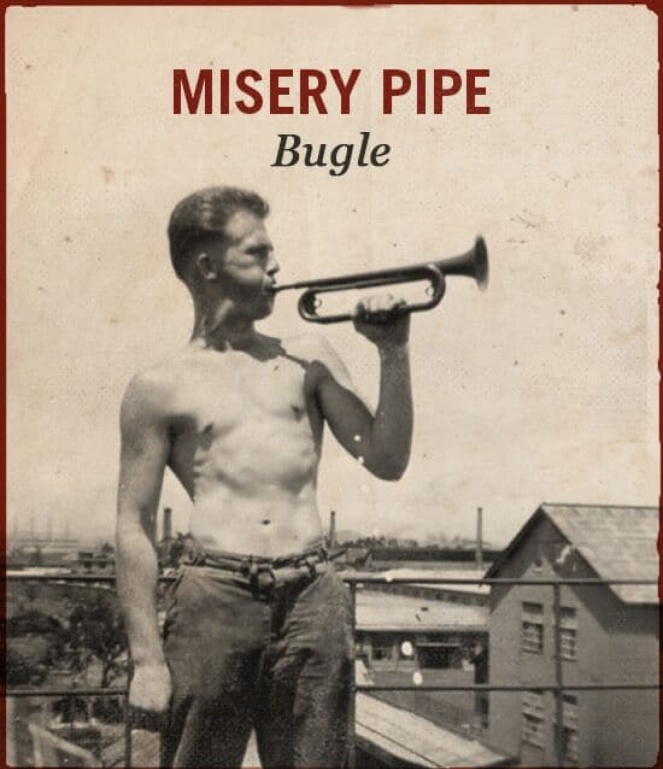 Penguin. Air Force service member who doesn’t fly.
Pep Tire. A doughnut. Energetická pneumatika. Kobliha.
Pig Snout. A gas mask.
Pineapple. A hand grenade. Ananas. Ruční granát.
Pinup. A picture of a woman for a soldier to pin up on the wall of his quarters.
Podunk. A soldier’s hometown.
Pocket lettuce. Paper money.
Popsey/Popsie. Girlfriend.
Popsicle. Motorcycle.
P.S. Man. One with previous military experience; one with a previous term of enlistment.
Put That in Your Mess Kit! Think it over.
Ratzy. A German; a blend of “rat” and “Nazi.”
Reg’lar. Regular; first-rate; excellent; a regular soldier.
Retread. A veteran of World War I fighting in World War II.
Ribbon Happy. Dazzled by one’s own decorations.
Rock-Happy. Bored, especially on the rocky islands and atolls of the Pacific.
Roger! Expression used instead of okay or right.
Rootin’, Tootin’ Son of a Gun. An energetic person.
Rookie. A recruit. 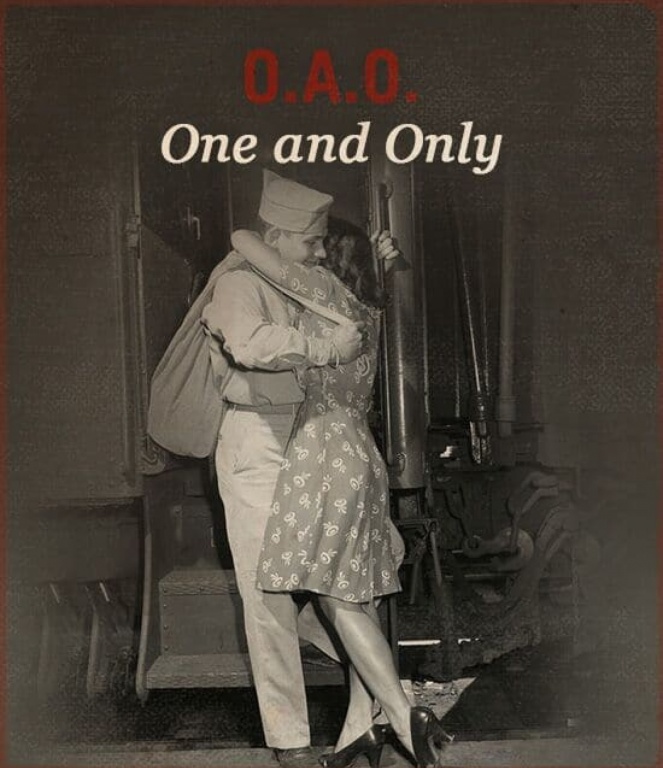 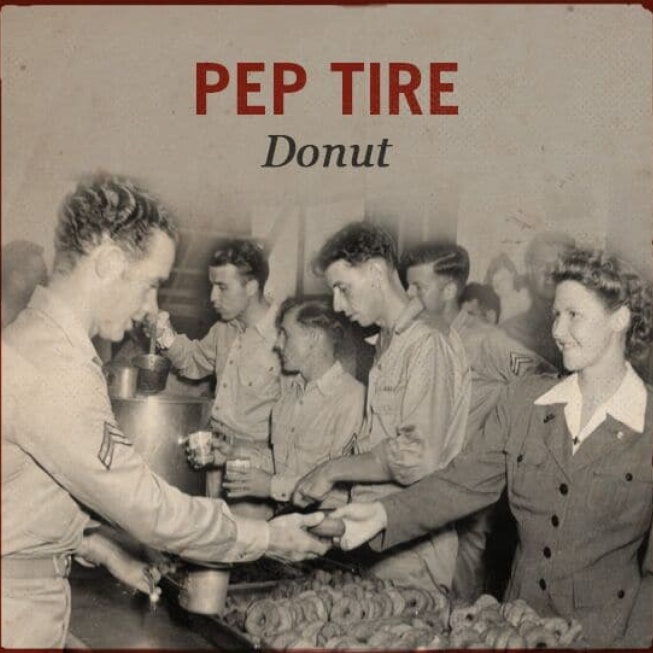 S.O.L. Shit out of luck; often sanitized as “sure out of luck” or “soldier out of luck.”
Son of Mars. A soldier.
Soul Aviator. Chaplain.
Soup. Clouds, rain, and most of all, fog.
Spud Duty. Kitchen police (K.P.) assignment (i.e., peeling potatoes).
Spuds with the Bark On. Unpeeled potatoes.
Stinkeroo. Poor in quality; low grade.
Stripe-Happy. A soldier too eager for promotion.
Sugar Report. A letter from a girl.
Suicide Squad. Those who operate a machine gun under fire.
Superman Drawers. Woolen underwear.
Superman Suit. Long, one-piece government-issue underwear.
Swacked. Intoxicated.
Sweat Something Out. Wait a long time for something.
That’s All She Wrote. That’s all; a customary cry of the company mail clerk at the end of the mail call.
That’s for the Birds. Nonsense, drivel, irrelevant matter.
Thousand-Yard-Stare. Name given to the look of a man with a combat-harrowed psyche.
Tiger Meat. Beef. 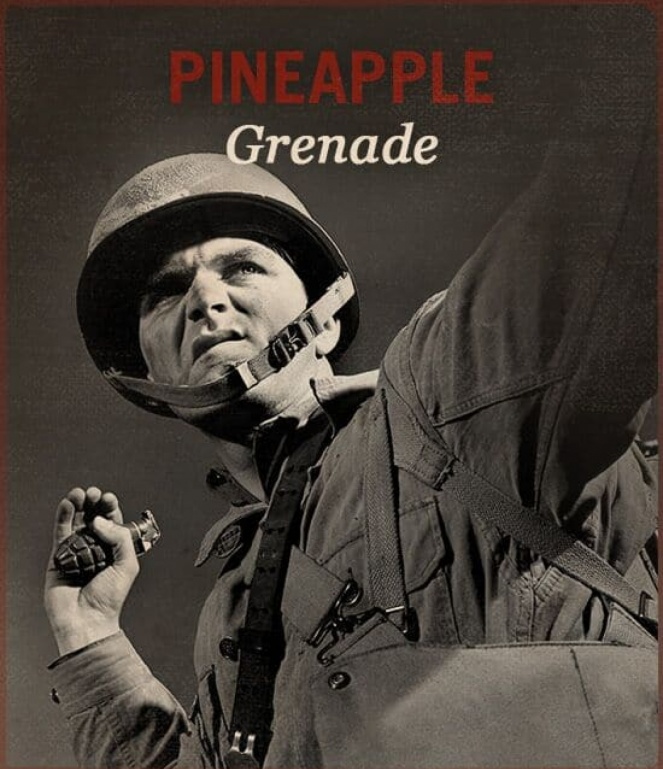 Tin Pickle. A torpedo or submarine.
T.N.T. Today, not tomorrow.
Torpedo Figure. A woman with a good figure.
Tough Row of Buttons to Shine. A hard job.
T.S. Tough situation! Tough shit! In other words, don’t be discouraged because of hard luck.
T.S. Slip. When a soldier’s complaints become unbearable, his listeners frequently tell him to fill out a “T.S. Slip” and send it to the chaplain.
Uncle Sam’s Party. Payday.
U.S.O. Commando. Hometown hero.
Valley Forge. Temporary tent city in cold weather.
Walkie-Talkie. Portable radio receiving and sending apparatus. Variations: Handie-Talkie, and Spam Can Radio, after its similarity to a can of Spam.
Walrus. One who cannot swim.
Wash Out. To be eliminated from flight training.
Wilco. Will comply. This radio code was used throughout the services and taken up by civilians. “Roger — wilco,” means “Okay — I’ll do it.”
Zombie. A soldier falling in the lowest category in the Army classification test.